Mexico City, abbreviated as CDMX; Nahuatl languages: Āltepētl Mēxihco) is the capital and largest city of Mexico and the most populous city in North America. Mexico City is one of the most important cultural and financial centers in the world. It is located in the Valley of Mexico (Valle de México), a large valley in the high plateaus in the center of Mexico, at an altitude of 2,240 meters (7,350 ft). The city has 16 subdivisions known as boroughs or demarcaciones territoriales.

The 2020 population for the city proper was 9,209,944, with a land area of 1,485 square kilometers (573 sq mi). According to the most recent definition agreed upon by the federal and state governments, the population of Greater Mexico City is 21,804,515, which makes it the second-largest metropolitan area in the Western Hemisphere (behind São Paulo, Brazil), the eleventh-largest agglomeration (2017), and the largest Spanish-speaking city in the worl.

Mexico’s capital is both the oldest capital city in the Americas and one of two founded by indigenous people, the other being Quito, Ecuador. The city was originally built on an island of Lake Texcoco by the Aztecs in 1325 as Tenochtitlan, which was almost completely destroyed in the 1521 Siege of Tenochtitlan and subsequently redesigned and rebuilt in accordance with the Spanish urban standards. In 1524, the municipality of Mexico City was established, known as México Tenochtitlán,and as of 1585, it was officially known as Ciudad de México (Mexico City). Mexico City was the political, administrative, and financial center of a major part of the Spanish colonial empire. After independence from Spain was achieved, the federal district was created in 1824.

“Mexico City is one of the most important economic hubs in Latin America. The city proper produces 15.8% of the country’s gross domestic product. According to a study conducted by PwC, Mexico City had a GDP of $390 billion, ranking it as the eighth richest city in the world and the richest in Latin America”.

The visualization shows the distribution of the means of transport to work used by the population of San Miguel de Allende in 2015 according to travel times.

The most used means of transport are bus, taxi, or similar and walking.

The population that takes up to 31 minutes to get to work prefers walking, while people who take more than 2 hours to commute use bus, taxi, or similar.

The visualization shows the total average quarterly current income per household in deciles of households in Ciudad de México comparing 2016 and 2018. 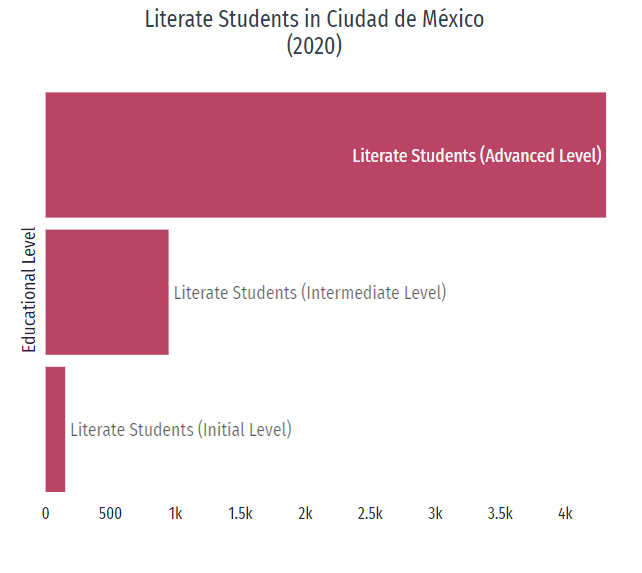 The same year, the most demanded careers in Ciudad de México were Law degree (64.6k), Degree in psychology (33.7k), and Degree in administration (32.3k)