Puerto Vallarta is a Mexican city and port located in the state of Jalisco, in the Costa Sierra Occidental region of the entity, 196km from Guadalajara, the capital of the state. Together with the municipality of Bahía de Banderas in the state of Nayarit, it forms the Metropolitan Zone of Puerto Vallarta being thus the second most populous of both states. It is currently one of the main tourist destinations in Mexico.

Puerto Vallarta, formerly called Las Peñas, was founded in the independent era, on December 12, 1851, by Guadalupe Sánchez Torres, his wife Ambrosia Carrillo and some friends such as Cenobio Joya, Apolonio de Robles, Cleofas Peña and Martín Andrade, among others, who gave it the name of Las Peñas de Santa María de Guadalupe because it was that day dedicated to the virgin.

The city, in addition to its sculptural acquis, is the birthplace of the world-renowned painter Manuel Lepe, his works show the Vallarta of yesteryear, small and friendly, one of his works can be appreciated inside the Municipal Presidency. It is also home to several festivals throughout the year. These include the International Gourmet Festival of Puerto Vallarta and Riviera Nayarit; where international chefs attend and deliver high-quality events, the May Cultural Festival, which commemorates its anniversary as a municipality; the International Film Show; the Art Walk, which includes the galleries located in the center and romantic area during the winter season; Charro National Championship.

“Tourism is one of the main factors for the economic development of this municipality. Puerto Vallarta receives approximately 6 Million tourists a year and offers its inhabitants and visitors a good number of beaches that are visited daily. Here you can admire a lot of natural beauties, historical monuments and works of art, which attracts many national and foreign tourists”.

The visualization shows the distribution of the means of transport to work used by the population of Puerto Vallarta in 2015 according to travel times.

The most used means of transport are bus, taxi, or similar and own vehicle (car, truck or motorcycle).

The population that takes up to 15 minutes to get to work prefers own vehicle (car, truck or motorcycle), while people who take more than 2 hours to commute use bus, taxi, or similar. 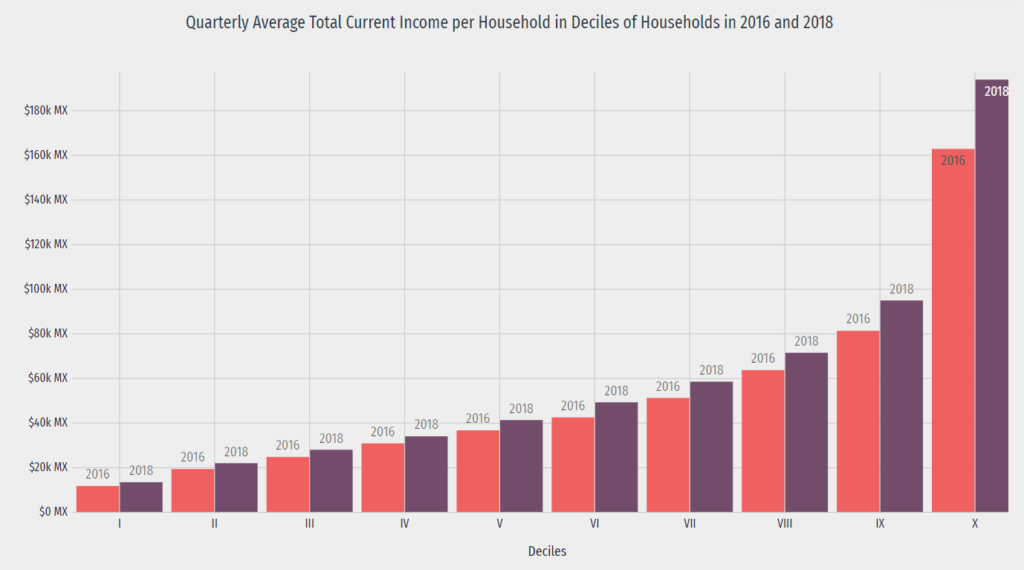 *The data presented is available to Jalisco’s state, since there is no representation at the municipality level.

The visualization shows the total average quarterly current income per household in deciles of households in Jalisco comparing 2016 and 2018. 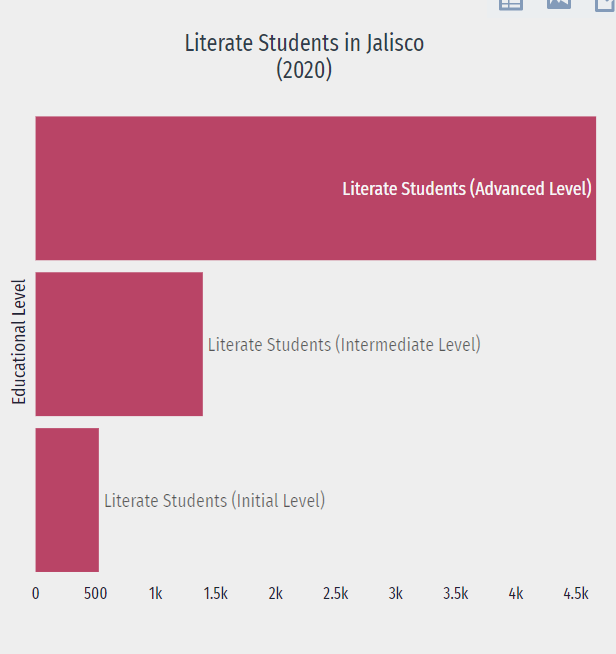 The same year, the most demanded careers in Puerto Vallarta were Bachelor’s Degree in Business Administration (1.96k), Degree in psychology (1.47k), and Bachelor of Tourism (1.28k)