San Miguel de Allende is a city in the Mexican state of Guanajuato. It is part of the Bajío macroregion.67 It is the head of the municipality of the same name and one of the main tourist destinations in Mexico. It is located at an altitude of 1910 m and is located 274 kilometers from Mexico City, 97 km from the city of Guanajuato, 157 km from León, and 70 km from Santiago de Querétaro.

In 2002, San Miguel was declared a Magic Village,8 being withdrawn this title in 2008 because on July 7, 2008 it was inscribed by Unesco as a Cultural Heritage of Humanity, under the title of Villa Protectora de San Miguel and Santuario de Jesús Nazareno de Atotonilco, the distinction was awarded due to its cultural and architectural contribution to the Mexican Baroque and its importance in the struggle of Independence of Mexico of Spain.

“In 2017 it was named by Travel + Leisure magazine as the best city in the world for its quality of service, kindness, gastronomy, cleanliness, shopping experience and mobility in addition to its great cultural contribution, architectural beauty, and places of fun”.

The visualization shows the distribution of the means of transport to work used by the population of San Miguel de Allende in 2015 according to travel times.

The most used means of transport are bus, taxi, or similar and walking.

The population that takes up to 15 minutes to get to work prefers walking, while people who take more than 2 hours to commute use bus, taxi, or similar. 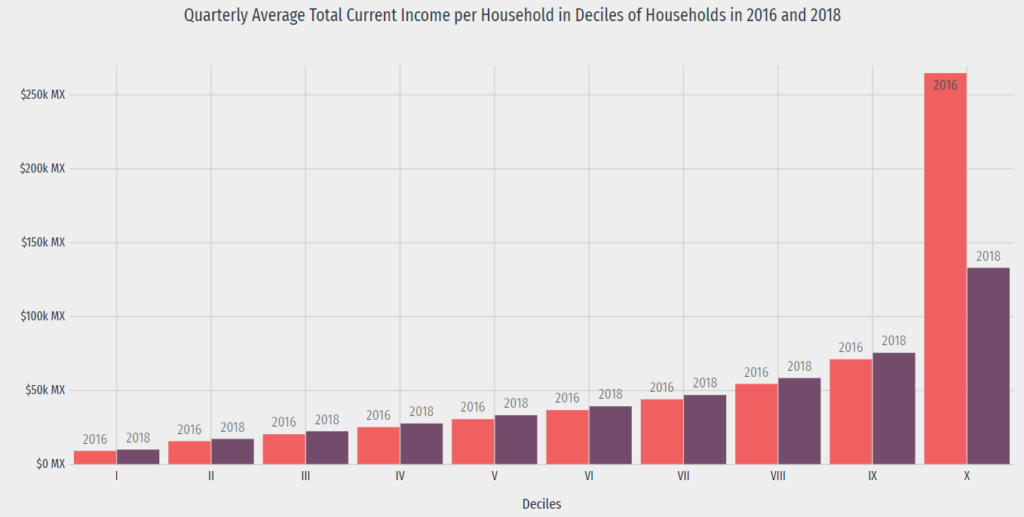 *The data presented is available to Guanajuato’s state, since there is no representation at the municipality level.

The visualization shows the total average quarterly current income per household in deciles of households in Guanajuato comparing 2016 and 2018. 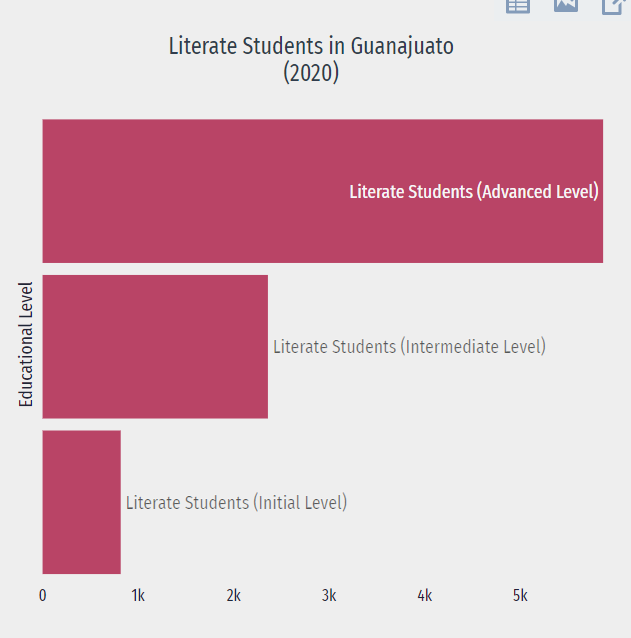 The areas with the highest number of men enrolled in bachelor’s degrees were Engineering, manufacturing and construction (596), social sciences and law (480), and Business Administration (402). Similarly, the study areas that concentrated the most women enrolled in bachelor’s degrees were Business Administration (830), social sciences and law (720), and Education (304).

The same year, the most demanded careers in San Miguel de Allende were Law degree (676), Technical university degree in gastronomy (538), and Licenciature in gastronomy (404).